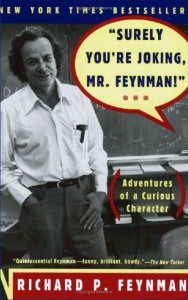 A mix of genres today, though that may be what you have come to expect around here; part literature, part science.

Lately, I have been reading Surely You’re Joking, Mr. Feynman, the autobiography of the physicist Richard P. Feynman - in the sense Feynman told the stories, and Ralph Leighton wrote them down. This book has been on our shelves for quite some time, as I gave it as a Christmas present to my wife a couple of years ago along with a biography on Albert Einstein (did I mention that our son recognizes Albert Einstein?). The dog ate the Einstein biography (true story), but spared Mr. Feynman.

There are a couple of themes that keep recurring. Curiosity is one - Feynman’s desire to explore the world is this incredible hunger that puts him in the most peculiar situations. I resist the temptation to list all of the examples, because part of what makes the book interesting is the way you can never really tell where it goes next. I will say this, though: He seems to apply a scientific method to the world around him. The very first chapter tells about young Richard falling in love with fixing radios. His enthusiasm is apparent from the first paragraph of the book:

When I was about eleven or twelve I set up a lab in my house. It consisted of an old wooden packing box that I put shelves in.

He goes on to telling about how he would set up a lamp bank in his laboratory, playing with bulbs in serial or parallel connection and making switch systems.

Also, from the start, Feynman is quite a trickster and almost gets into trouble. His electrical experiments set off a small fire in the house, which he manages to hide from the parents. He discovers that his radio will pick up a radio channel with a show all the children listen to - an hour before they usually listen to it! And he will join them afterwards to make clever comments about what next to expect in the plot… and the first thing he describes from his time at MIT is stealing a door and hiding it; later, he finds out how to open the safes at Los Alamos to demonstrate their inadequate security - an amusing parallel to how Steven Levy describes in his classic book Hackers the later practice at MIT of picking the locks because everyone should have access to information, and a computer shouldn’t stand around without being used - and of course, the similarity is that it is not just a practical consideration, but also a brain game. A challenge that, once encountered, can only be met and resolved accordingly.

He describes a difficult youth. Even when he gets older, he has his problems with women. At MIT, he puts great thought into the right way to just walk past the girls. And, of course, the physical awkwardness that seems associated with the natural sciences - often discarded as prejudice, and yet repeatedly confirmed - is summed up in a side comment on sports:

I was never any good in sports. I was always terrified if a tennis ball would come over the fence and land near me, because I never could get it across the fence-it usually went about a radian off of where it was supposed to go.

This actually makes for an interesting contrast and again, a good reason for reading this book: In most of what Feynman comments on in the book, he is confident bordering on (and sometimes beyond) cocky, but he is also extremely honest about his weaknesses and fears as a human being, which makes the book a very personal and charming read. As he describes how he conquers his challenges, he mixes some rare insights with a human story. He does get married, but his first wife dies from tuberculosis in 1945 while he is working at Los Alamos, and this chapter is very personal. He marries a second time in 1952.

This honesty is a recurring feature as well. He descibes being in Brazil to teach, and he encounters an interesting phenomenon: That the students on the face of it seem to know the curriculum completely, that the questions they are asked are answered in full - but when he starts asking them questions with scenarios, it turns out that they do not know the answers; and he discovers that they memorise everything without actually understanding it! And that is how they perceive learning. Of course, he tries to promote the inquisitive mind, genuine curiosity and debate about the topics, but it turns out that each student is so deeply trained in never admitting doubts, confusion or mistakes that the idea of a study group is discarded beforehand.
Feynman spends a lot of time on this, and he never fails to stress that it is his curiosity, his need to understand, that has brought him far and will bring him further - and being honest about what he doesn’t understand, and what is not yet understood in general, is a necessary part of that.

For the same reasons, he comes across as rather harsh when he is asked to be on the board reviewing schoolbooks. Not only does it very soon become clear that the other reviewers are barely skimming the books in question before giving their recommendation, it is also clear that the books are of an appalling quality and completely unfit for, you guessed it: Stimulating curiosity and creativity. He also rages against the politics of it: When one of the publishers offering the books at an earlier date, another does the same - and at a reduced rate! So, Feynman concludes, it seems that when you push the timeframe, the books become cheaper as well!

There is one interesting point where it is clear that Feynman is a product of his time. I have already mentioned Los Alamos, so perhaps you know - he participated in research for the army during the 2nd World War and cold war that followed - and actively encouraged his fellow scientists to do the same. As a result, he takes part in the research in nuclear weapons as a patriotic duty and is present at the nuclear detonation of the Manhattan project. While his personal opinion seems to go a bit back and forth on this, this biography contributes an interesting personal portrait of people like Oppenheimer who were involved in this research, and whom history has not only been kind to. There is also an interesting description of the clash of cultures between the army way and the academic approach.

Feynman’s curiosity is expressed in a different form - namely, his eagerness to examine other areas. In Princeton, he visits classes of other fields like biology and philosophy. In a series of discussions with a friend, an artist, he concludes that their lack of agreement is based on the fact that the artist does not know science, and he himself does not know art. So he sets out to learn drawing - and learns it with the help of his friend, and also painting - and suddenly he has a small business on the side selling paintings!
His interest in music also comes across - he learns to play drums quite well during his time in Brazil and gets to play with local bands; this also earns him some interesting friendships over time after he comes back to the States. In the time before he goes to Brazil, he learns Portugese, and spending some time in Japan, he learns some Japanese. Confronted with the riddle of Mayan hieroglyphs, he goes into deciphering an archeological find, a Mayan calendar.

I could say that Richard Feynman eventually ends up winning the Nobel Prize, but that would not be fair. While he certainly finds the discoveries that earn him the prize important and fascinating, the prize is of less interest to him and does cause him to get more attention than he wants and, one might say, the wrong kind of attention: The attention you get because you are a Nobel Prize laureate, not because you are an interesting or otherwise relevant person. As you will see, this rubbed against his view of the world.

This book was first published in 1985, a few years before his death in February 1988, and in the time after his death, what I find about him is mostly his literature, the materials he has written for teaching and, indeed, popularizing physics, and he is said to have been especially proud of being awarded the Oersted Medal for notable contributions to the teaching of physics.

The book is partly educational for the scientific content, the historical description of how certain discoveries came about, interesting portraits of great scientists - and partly a human story of an occasionally very shy and occasionally very extroverted, but always inquisitive person.

Bibliographic references are available from the Open Library page on this book.