Kim Rasmussen has made me think of layers of society.

Many of the people in the circles I frequent are high-volume consumers of Ted Talks and podcasts like Radiolab, Freakanomics, To the best of our knowledge, Stuff To Blow Your Mind, Skeptically Speaking and a truckload of technology casts - just to mention a few examples. There is a huge load of such programs of educational entertainment.
I find that this occasionally leads to a mental disconnect where I mention things to people in passing - things that completely blew my mind when I learned about it. A recent example was a conversation I was having where I said “it is like that Dawkins thing about considering your childhood memories, where the remarkable thing is that all of your cells have been replaced over the years, so no part of your body was actually part of this memory, even if you remember experiencing it physically” - and then I continued - until I stopped, because I realised that the person I was talking to was having a mental expansion experience.

In many ways this is what happens when a politician says that there are fairly simple solutions to piracy or child pornography like, say, DNS-blocking. Since this is clearly useless, the conversation completely disconnects my brain between the starting point and an actual solution.
Same thing happens when a teacher is associating freely and comes to the epiphany that it is actually a question of making the children engage in the learning the same way as when they play video games. So I pull out maybe 15 podcast episodes discussing this, or I say ‘Since this is already being done, we should probably focus more on…’ leaving the other person disconnected.

I am not trying to guru myself here, I just have this experience frequently - and I find that this makes it difficult for me to discuss things with a lot of people who actually have an executive role where I have only just grasped the basic principles behind it.

Open source snobbery or why awesome is almost, but not quite enough

So I have a dilemma with what I use as my computing platform. It is a silly thing, but I suspect that others experience a similar thing, and that makes it something worth considering. It is a technical issue mixed with, or undermined by, aesthetics.

I have been a Linux user for a number of years - in various incarnations. I started out as a Red Hat user - back then I dual-booted between Windows and Red Hat, partly because getting a working internet connection was a challenge. I changed to Mandrake Linux which was impressive enough to let me change entirely. After that I tried out a large number of Linux distributions as well as variations of the BSDs. I settled on Slackware with Slackware 10.0 and enjoyed the Slackware philosophy: You can set up this system to do and be anything. I learned to rewrite the boot scripts, recompile the kernel to only support the hardware I owned but do that well. It was a great satisfaction.

However, with my two most recent laptops, both Thinkpads, I have experienced difficulties with wireless as well as power management. It seems they have the same issues with suspend, and the wireless connection is consistently dropping. The first aspect I have found an explanation for and solution to, but not the latter.
As a result, I have had to leave Slackware and look elsewhere for the most fitting system   for this old X32. And this leads me to an embarrassing problem with making an appropriate choice.

I guess it comes down to a perception of hierarchy. Plainly, everyone will agree that Slackware is a distribution for Linux users who know their way around the basic Linux system, simply because if you don’t, you are not going to get an installation that is usable.
What this means is that Slackware is an endgame distribution. If one looks at the mailing lists, people have been using Slackware for ages, and people who end up with Slackware are going to stay there.
However, if you have to become a refugee from Slackware, the original Linux distribution, it is going to be an extremely ambivalent process. Because you already made it all the way.

I am using Fedora 16, the Lxde respin. And actually, this is a lovely distribution. It is lightweight, it is up to date, it will do the nice things you want without too much customisation. However, it goes through a lot of stuff before it is ready to log in, and I have no way of gettng a feel for the system. And it gives the distinct impression that one is not supposed to. A lot of stuff works automagically on this system, and it does seem a bit sensitive to tampering. I should not neglect to mention that one can get quite spoiled using a system which will do a lot automatically compared to a distribution where one has to do a lot of work before using it will be smooth and simple…

Now of course, the most marketed hobbyist distribution is Ubuntu. But that is a mainstream beginners’ distribution with a questionable approach to community and going for the mindshare. Leaving aside that Gnome3 and Unity will not run on my hardware, Ubuntu simply does not appeal to me. While Linux Mint is considerably more appealing visually and when it comes to functionality - I just downloaded their new Lxde release, and it works quite well - but I always get bugs with these Ubuntu derivatives, and somehow a couple of lines of terminal output will always peek out. If one is running an OS where this is intentional, that is not a problem, but with these, it just looks sloppy. I can also choose to see it the way that they can’t be bothered to support the older hardware I have chosen to buy. This does not make it more appealing.

Recently, I have installed Chakra and Arch - they both had some boot issues I could not track down. They would boot, but they would be probing the hardware for so long that it was pointless. I tried FreeBSD, GhostBSD and PC-BSD - they give a strange boot freeze error. The Red Hat Enterprise/CentOS/Scientific Linux family will not accept my machine because it has to go with PAE - which my CPU does not. Since this is an older machine, I am not even going to attempt to make Gentoo play on it. It would take me a week to build a usable system on this old iron. Dragora, while interesting as a Free-as-in-freedom-FSF-approved take on Slackware, simply won’t give me a good X.org implementation.
I mention these because they are respectable systems. Arch, FreeBSD and RHEL are distributions for technologists. Fedora gets a few bonus points as a member of the Red Hat family with a healthy dose of community.

Long story short, I feel a bit like a phony, and the more I use this, I feel less of the feeling that made me happy about running an open source craftsman’s OS. For the time being, I will stick with Fedora. I have Debian Live sitting on a USB stick next to me - Debian is a respectable community tool. A bit of work would be needed to really get into it. When I used Debian way back, it seemed very elaborate, but powerful.

I have recently become aware of an RSS reader called Newsbeuter. It is quite different from the tools I usually use for the task, so some observations are in order.

RSS - Really Simple Syndication - is a way of getting updates about a site or service. I use RSS feeds for two distinctly different things.
First, I use the feeds for site updates, which I do for two reasons. One is for friends and people I know and respect who update their weblogs and the like, or magazines. It is good to be on top of things. The other side of that is that I receive updates to software I use, applications like Uget, for instance, which I package for Slackware.
The second major thing is podcasts & podiobooks. Ever since we got a dog and I had to walk endless miles with him - and later on with our son - I have been listening to a lot of podcasts and podiobooks. The latter is an audiobook released as a podcast - as in chapters released one by one.

Now, there is a truckload of RSS readers. The principles are simple - an RSS file is basically an XML file. But the application is done differently. For my particular purposes, most programs for the task have been a frustrating acquaintance. Until recently I was using the plugin Newsfox with Firefox, but I have discovered an even better tool: Newsbeuter. 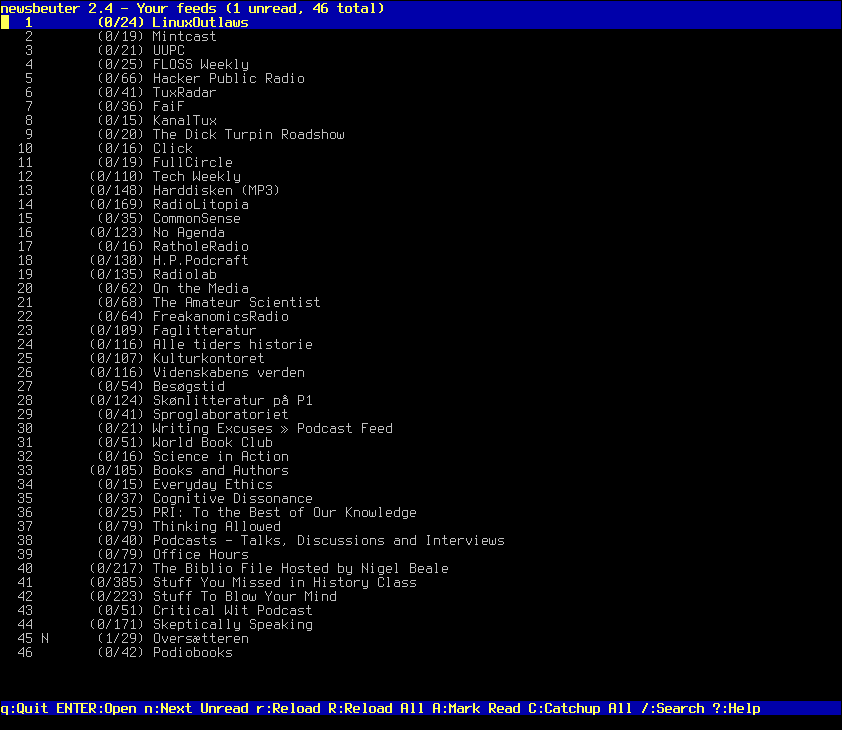 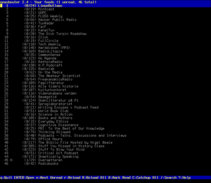 As you see, there are two sides to using Newsbeuter as a podcatcher - there is the main Newsbeuter interface, and if you are going to download files from it, you enqueue them for download and access the Podbeuter application (which is packed with Newsbeuter). Podbeuter will work as a download manager.
To be honest, Podbeuter is really very good - as a download manager. Frankly, if I could find a way to push download links to Podbeuter, I would use it as my main download manager for all other kinds of files, too! In the background, it uses Curl for the download.
Newsbeuter is quite well-documented at the website documentation section, but primarily you will need the files config and urls, which I put in ~/.newsbeuter:

Config - here is my config file:

Is is probably fairly self-explanatory, but I go into the reasons for the setup in the video.

- and of course the urls file. You can  probably guess what it contains. Here is my urls file - basically just a link list.